Summary 18 Exemplary houses in the Netherlands

From the publication “Voorbeeldwoningen 2011” of Agentschap.NL, we have made an Energetic and Economic analyses of the 18 most common houses in The Netherlands.

We started from the situation as described in this publication. Over the years, many of these houses have already been renovated or modernised. All of the houses that we analysed have been built between 1946 and 2005.

The following housing types have been analysed:

Energy consumption of the houses is based on actual use. The houses are entered into the PHPP in the current situation. The airtightness is adapted to the technical practice of the period in which the houses were build. Average indoor temperature is set between 16°C and 19°C. For thermal bridges, assumptions are made that match the building style and building period of the houses.

Also taken into account in determining the return on investment are:

The increase of the market value of the house as a result of the investments, is set on 60%. 40% of the investment vaporizes. In order to be able to compare the retrophit measurements, a fixed amount for Real Estate Tax (OZB), which differs from one municipality to the other, is set for all reference houses.

In the analysis, for each house, the potential improvement measures are calculated for:

Application of measurements The applied measurements always meet the requirements for a healthy and comfortable house. This is a strict requirement that is not compromised.

Maximal insulation within the existing construction without replacement of window frames and replacement with Hr++ glazing in all housing types leads to a reduction of the Total Cost of Ownership.

Retrophit according to the Passive House Standard in most cases can be realised against the same costs with regard to the TCO if the average in-house temperature is not raised. If the average in-house temperature is raised to 20°C the TCO rises considerably as a result of the costs for energy consumption, but at the same time, comfort is increased.

The amount of window frames has considerable impact on the financial feasibility to reach passive house standard.

For all types of houses, PV-panels play an important role in the economic feasibility of an energetic retrophit. A retrophit of houses that are suited for installation of photovoltaic panels oriented to the south, east or west, are more profitable.

It is necessary that the current regulation for balancing the electricity remains or is adapted in a resident-friendly way, otherwise an energy transition to energy neutral retrophit cannot be realised (with regard to housing costs.

Houses that are renovated with a new envelope, causes a considerable investment, which currently cannot be earned back by means of the energy savings. It is necessary to scale up and innovate new facade elements and rooftop elements, so that prices will decrease. In All-electric houses, the application of a heat pump is profitable. As a result of the Seasonal Performance Factor) of thermodynamic heat pumps, in most cases these proved to be the most economic choice.

Not using natural gas is only possible if there is sufficient room for solar panels.

Solar collectors are only financially profitable compared with electricity-only concept.

Wind turbines are economically not profitable.

As a result of the current electricity balance regulations, storage of electricity is not profitable.

Triple glass in most cases is financially profitable compared to Hr++ glazing and justifies €1000 extra for adapting the existing window frames.

In the overview below, the TCO for the retrophit and the maximal savings are listed. 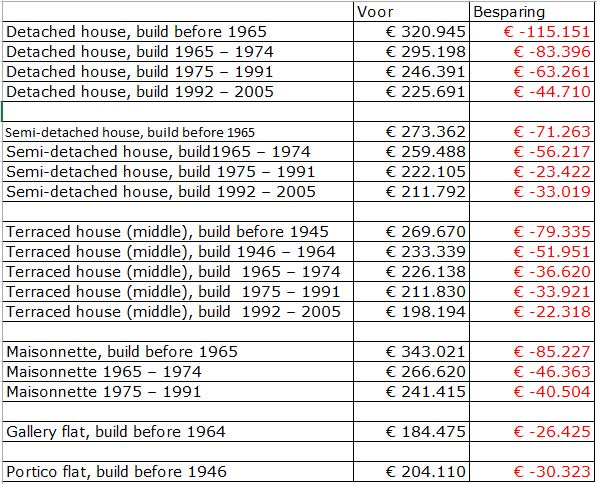 Accessible via this link: http://www.rvo.nl/sites/default/files/bijlagen/4.%20Brochure%20Voorbeeldwoningen%202011%20bestaande%20bouw.pdf

Appendix 2: pages on which the reference houses are described are listed.