In Bulgaria a number of qualification criteria are proposed for Energy Service Companies. When meeting these criteria, the ESCO can enter the Bulgarian market, offering energy efficiency services with guaranteed results. Ideally, ESCO projects will be confirmed by the relevant Contracting Authorities as to their size and level of guaranteed savings. These confirmations may be used as additional qualification criteria of the organisations. Other requirements for qualification of ESCO organisations, which come forth from Bulgarian Law, include their financial robustness, supported by an audit. In case of substantial contracts with high investment costs the requirement may include an audit by one of the Big Four - KPMG, Deloitte, PWC or Ernst & Young.

Technical criteria and conditions for their fulfilment are already set, in part, by the Bulgarian Procurement Law. However, this law may have to be amended for specific ESCO purposes. Relevant amendments depend on whether the projects involved are large or small (according to threshold for the open and restricted tendering procedures). The present criteria include the following:

• To be registered at the Agency for Energy Efficiency in the register of entities, performing studies in the field of energy efficiency and certification of buildings.

• To be registered at the Central Professional Register of the Construction Workers in the Republic of Bulgaria (in case construction works are envisaged, i.e. in all cases most probably).

• To have staff members who are registered as a chartered engineer, etc. (staff qualification requirements are yet to be developed)

• Expert assessment of the admissibility for the purchase of the receivables according to the ESCO contract or to the report on Measurement and Verification of energy savings (the M&V report).

• Etc. – other criteria relevant to the proposed operations.

For projects above the threshold for an open procedure, the following additional requirements could be stipulated for ESCOs:

• To have an implemented quality management system in compliance with the international standard ISO 9001: 2008 or equivalent (?);

• To have an implemented work safety management system in compliance with the international standard OHSAS 18001: 2004 or equivalent (?);

• To have implemented environment management system in compliance with the international standard EN ISO 14001: 2005 or equivalent (?).

Of the large buildings in Bulgaria most are owned by the government, a government agency or an organisation that is closely linked to the (local) government. Hence most ESCO contracts are awarded as public procurements for construction or so-called engineering (which covers execution by whatever means of one or more activities such as pre-design investigation, design, organization of construction, supply and installation of machinery, plant and process equipment, preparation and commissioning of the project). /REFERENCE:ADVISORY SERVICES FOR THE EBRD, Enviros/ C20107/ KIDS-2010-03-01. 127.p./

In addition to the criteria for ESCO organisations, another set of criteria governs the contracts regarding public buildings. Specifically, the Bulgarian Public Procurement Act includes general limiting conditions which also apply to the contracts with guaranteed result.

Most funds or other financing schemes involve a managing team or organisation. So in addition to being a stream of money they are institutional entities.

"The Fund for Local Authorities and Governments (FLAG)" This Fund for local authorities and governments was established in March 2007 by the Council of Ministers with funding provided through the Bulgarian National Budget. FLAG is an instrument of the central government for their policy on regional development. Its aim is to provide financial assistance to municipalities for the absorption of as much funds as possible from the Structural Funds and the Cohesion Fund of the EU. The contribution of FLAG to regional development involves coverage of as many municipalities as possible, located throughout the entire territory of the country, by creating conditions for maximum absorption of the funds from all operational programmes that can benefit the municipalities. The Fund is an independent legal entity having the status of a commercial company (joint stock company). It is structured as a revolving mechanism for financing the development and implementation of economically and financially viable projects in the area of municipal infrastructure and for supporting capacity building of municipalities with a view to absorbing funds from the structural and cohesion funds. The Fund is designed as a financial mechanism to overcome the problem of ensuring cash funds to municipalities when they develop project proposals or finance approved projects in the framework of the Operational Programmes, co-financed by the EU funds. FLAG established a partnership with Unicredit Bulbank (Managing Bank). The bank’s role is to assist the Fund in assessing applicants’ creditworthiness and to administer the loan repayment. FLAG finances only projects which the Managing Bank regards as financially and economically admissible, and which have been approved by the respective Operational Programme, except for the financing of the preparation of projects (project development).

EESF SPV This is one of the security Funds run by Enemona, and it invests in receivables from energy efficiency and energy contracts. The primary activity of the Fund is the secure management of receivables, e.g. investing the financial resources raised by issuing of securities in receivables. The European Bank for Reconstruction and Development (EBRD) is supporting the development of the market in Bulgaria to promote energy efficiency, with a loan to the Bulgarian ESCO Fund named the Energetics and Energy Savings Fund SPV (EESF). This is a special purpose company to finance the energy services business of Enemona AD, a construction and engineering group. Since its establishment in 2006 EESF has obtained receivables under more than 20 Energy Performance Contracts (EPCs) with a total nominal value exceeding BGN 8 million. €7 million was provided for long term financing of new projects. Typically the fund has supported energy efficiency projects in kindergartens, schools, hospitals and other public buildings.

The Bulgarian Energy Efficiency Fund (BEEF) BEEF is structured as a self-financing commercial mechanism and focuses on support for energy efficiency investments and promotion of the development of a functioning market for energy efficiency services in Bulgaria. The major environmental objective of BEEF is to support identification, development and financing of bankable projects for energy efficiency improvement leading to mitigation of GHG emissions in the atmosphere. The Bulgarian Energy Efficiency Fund was established by the Energy Efficiency Act, adopted by the Parliament in February 2004 and its entity was confirmed with the newly adopted Energy Efficiency Act in October 2008. BEEF is a legal entity managing financial funds, granted for the purpose of investment projects for increasing the energy efficiency, according to the national strategy. It’s major donors are the Global Environment Facility through the International Bank for Reconstruction and Development (the World Bank), the Government of Austria and the Bulgarian Government. BEEF operates under the regulations of the Energy Efficiency Act and agreements with the donors. Its resources are not a part of the consolidated government budget. The main sources of BEEF’s funding are donations from international financial institutions and funds, Bulgarian and foreign legal entities and private individuals. Additional sources include current account rates and the bank deposits, loans and other credit instruments that BEEF offers to international organizations, banks, individuals and legal entities. The initial capitalization of BEEF was entirely with grant funds.

Kozloduy International Decommissioning and Support Fund The Kozloduy International Fund was set up with the aim to help Bulgaria to overcome the consequences from decommissioning turbines at the Kozloduy Nuclear Power Plant. The Funds finances and co-finances the preparation for and implementation of projects for the prevention of the negative impacts from the decommissioning of the turbines. The administrator of the Fund is the European Bank for Reconstruction and Development (EBRD) in compliance with the Framework Agreement signed between EBRD and Bulgaria. The managing body of the Fund’s assets is the Ministry of Economy, Energy and Tourism.

Role of Bulgarian Banks (LFIs) Local Commercial banks will: - Provide short-term credits to creditworthy ESCOs for financing investments into energy saving measures under approved Energy Service Contracts with guaranteed results (contracts meeting clearly described and agreed eligibility criteria). - Purchase from the ESCO companies receivables according to the ESCO contracts with completed civil and erection works (fulfilling phase 1 of the contract). Moreover, in the future, local commercial banks will be collecting receivables from Contracting Authorities (municipalities, building owners) payable under the contracts with guaranteed results. The bank which buys receivables from an ESCO does not need to be the same bank as the one which provided ESCO with the short term credit. The collected receivables will be used for reimbursement of the short-term credits provided to ESCOs. REFERENCE/ADVISORY SERVICES FOR THE EBRD, Enviros/ C20107/ KIDS-2010-03-01, 110.p./ 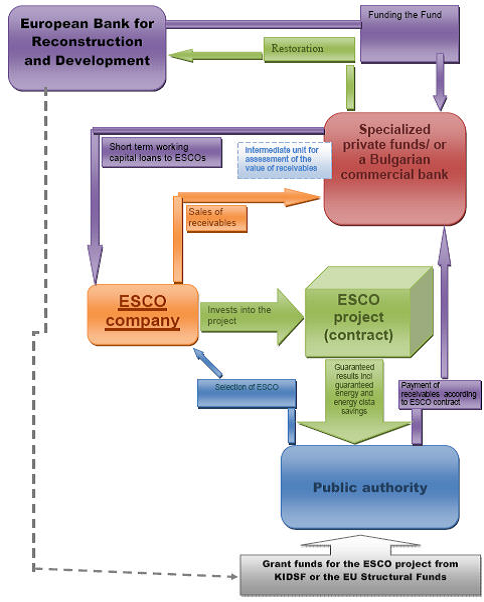 Figure: Proposal of financing of ESCO projects - via short-term loans, sales of receivables by ESCOs, with the participation of grant funds