Currently, thermal regulation in force in France, RT2012 does not particularly support implementation of PH standard at any level. France has its own standards and labels, which includes target of NZEB positive energy buildings (produce more energy than consume) for 2020.

Why a Passive house label is not a need for the building sector in France?

It is a matter of will, training professionals and structure of the industry, not a cultural problem or that it is wrong for the French model, but the main obstacle to an orientation towards Passivhaus label is that the French have their own labels and building regulations “RT012, Bepos, Effinergie+, etc.”. They do not feel the need for other labels and regulation, especially as they already feel the burden of current ones. We can clearly see the negative reaction of French architects against the HQE association, the dispute was not about the sustainable management or environmental effects, but it was about restricting architects with more controls and laws that limited their creativity.

During the past 30 years and more, the French authorities have made commitments under different international Conventions and Protocols on atmospheric pollution and climate change to limit or reduce the quantities of certain air pollutant emissions by certain dates.

In 2007, France organised the “Environment Grenelle”. It appeared to be an original approach whereby, for the first time, all the stakeholders in France reached an agreement on a shared diagnostic and action plan. In general terms as far as global warming is concerned, the Grenelle confirmed France’s ambitions in relation to the Kyoto and European commitments (notably Factor 4 by 2050 and 3x20 by 2020) and defined a series of specific measures for the building sector, placing it at the heart of the fight against GHG emissions.

The “Environment Grenelle” led to a law, called RT2012, a new thermal regulation for new residential buildings. This regulation was extended to all new buildings on 1 January 2013 (the date of filling an application for a building permit). From that date on, the labels corresponding to the old rules (including the label "low-energy building," known as BBC) no longer exist; RT2012 is currently applicable to any construction project thermal regulation.

The RT 2010, 2015 and 2020 were considered before the Grenelle Environment. Each regulation should be improved 15% in energy performance compared to the previous one. Therefore, the Grenelle then planned a reduction in consumption with the goal of 3% per year by 2020, effort possible with thermal renovations on older buildings. 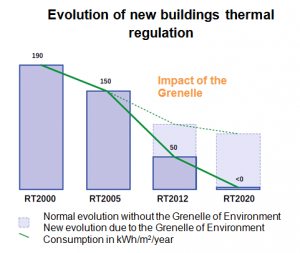 Besides the three main performance requirements, another RT2012 innovation compared to RT2005 is its introduction of new requirements. Among them are:

In France, Build passive is a choice, but build RT2012 is an obligation.

THE CONSUMPTIONS TAKEN INTO ACCOUNT IN THE RT2012 AND PH

In France, the question is no longer simply how to compare regulatory structures RT2012 with Passivhaus label, but rather whether passive constructions can be certified in accordance with the RT2012. Without a positive answer to this question, it would not be possible to build “Passivhaus”.

To determine whether passive construction labeled “Passivhaus” can be carried out in full compliance with the new thermal regulations RT2012, it is necessary to check if the label criteria Passivhaus can ensure compliance with the RT2012 or, conversely, if the results requirements and obligations through RT2012 achieve the same performance as the Passivhaus label. In the Table 1, we present the main differences between Passivhaus label and RT2012.