Training in a shadow team 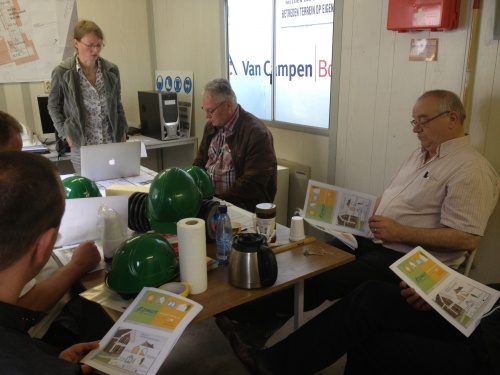 The “Shadow team”- approach is a practical method to share hands-on knowledge about the building praxis of NZEB based on Passive House technology combined with renewable energy in all the phases of a real project at all the aspects. The goal of a “shadow team” is literary to “look over the shoulder” of a building team.

The organisation of a shadow team is easy. All you need is a pool of colleagues who are eager to learn more about NZEB’s, a real NZEB-project with a building team that doesn’t mind to be “shadowed” and someone from that team who is willing to provide information about the process of the real project.

In general five meetings will do:

1. The first meeting is to form the “shadow team” and provide information and agree on the focus. The team is briefed (fact sheets) about the real NZEB-project and the specifications of the client. You can also invite the client of the project to tell the team what she/he or his/her company consider(s) to be important about the project.

2. The second meeting focuses on the draft design and the context (in terms of important actors and factors) of the project. The team is briefed about the process and design, the problems solved etc. In this stage the members can be given a specific design task to work on by themselves. They even could organise one or more meetings themselves to get the task done.

3. In the third meeting the “shadow team” is presenting their task to (a part of) the real team. The real team evaluates this and provides feedback. Next to this the team is briefed about the final design and problems that have occurred and solutions.

The meetings could take place in the evening (19.00 – 22.00). The organisation takes about 4 hours per meeting. In our experience the members of the real team spend their time for free because they consider it important to disseminate their knowledge and experience, certainly if we use their precious time as effective and efficient as possible.