In the year 2004 realization of the project "Heat insulation of buildings for energy saving purposes" has been started. During this project municipalities and communities of apartment owners (cooperative communities of apartment owners, Ltd.) had an opportunity to obtain loan with favourable conditions for complex heat insulation of buildings. The project "Heat insulation of buildings for energy saving purposes" has been implemented in co-operation with German Federal Ministry for the Environment, Nature Conservation and Nuclear Safety, German Development Bank Kreditanstalt für Wiederaufbau (KfW), Ministry of Environment of the Republic of Latvia, Environmental Investment Fund and Mortgage Bank. In total 5 million euro has been allocated for realization of the project. In the beginning 127 applications for loans has been received and Mortgage Bank specialists have selected 47 projects to participate in the 2nd stage of competition. Unfortunately many of applicants refused from the idea of project implementation during the preparation process. Main reasons bothering successful realization of the project and loan obtaining were: Difficulties in receiving acceptance of 75% apartment owners to start the project, which is necessary, pretending for loans without mortgage, Due to different wealth level of apartment owners, it was difficult to organize common activities in loan obtaining, Within the project there was planned complex building renovation, which is technically fine, but at the same time is money consuming. Not all of the apartment owners were ready for loan liabilities, which are necessary for financing house renovation in accordance with the program conditions. Until year 2004 / 2005 heating season there have been completed 5 building renovation projects. And there also have been organized the evaluation of results obtained during the heating season. In 2005 renovation of two more houses has been finished: During the project complex renovation of building was done and as a result windows have been changed, external walls, ceilings of cellar and top floor have been heat insulated. Within the framework of the project Environmental Investment fund:

- Provided consultations to the representatives of municipalities about the possibilities of financing,

- Supported municipalities during the project implementation, e.g. procurement process and process of reconstruction,

- Performed environmental improvement monitoring of the implemented project during the loan repayment period.

- Within the framework of the project "Heat insulation of buildings for energy saving purposes" the compact disc has been prepared, which summarises all necessary information about technical and economical aspects of house renovation and also includes all the informative materials, distributed during seminars. (1) http://www.lvif.gov.lv/?object_id=420

Housing renovation projects have been implemented within the framework agreement between the Federal Ministry for the Environment, Nature Protection and Nuclear Safety of Germany and the Ministry of Environment of the Republic of Latvia. This monitoring report covers the first 5 renovation projects that were finished in 2004 and also 2 projects that were finished in 2005. The aim of this monitoring report is to analyze the achieved results and to provide information on energy saving potential in the housing sector based on concrete projects. The projects are located in 4 regions of Latvia – Riga, Saldus (Broceni), Liepaja and Limbazi (Salacgriva). The project owners in Riga and Salacgriva projects case are associations of apartment owners, but in case of Broceni and Liepaja – municipalities. 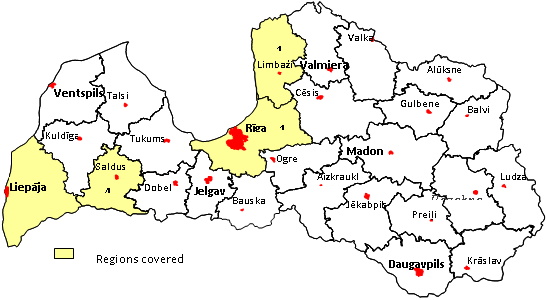 The monitoring report was prepared by the Latvian Environmental investment fund in close cooperation with the project owners that provided information on results achieved and renovation activities carried out.

The calculation of CO2 reduction is based on determination coefficient KCO2.

CO2 emissions were calculated using the following formula for woodchips:

where, B – fuel consumption (t) per year, month etc. CO2 emissions were calculated using the following formula for natural gas:

The data on thermal energy consumption by each building was provided by the projects’ owners and are based on heat meters that are installed in each building.

For calculation of gas consumption the following data was used for the Riga and Liepaja projects:

For calculation of woodchips consumption for the projects in Broceni, data obtained from “Brocenu siltums” Ltd, was used – 1.5 m3 (or 0.525 t) of woodchip are required for generation of 1 MWh of thermal energy (boiler's efficiency – 90%, heat loss in heat supply networks – 14.4%).

In total 5 projects were finished in 2004 and 2 projects in 2005, which can and will be analyzed in the monitoring report: 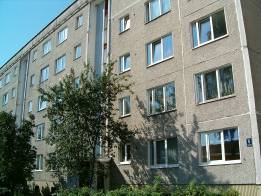 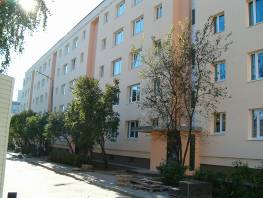 Before and after project, Celmu str. 5, Riga 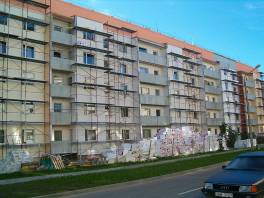 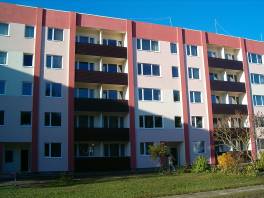 During and after insulation of the building – Skolas str. 21, Broceni 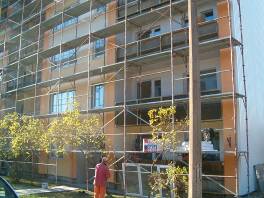 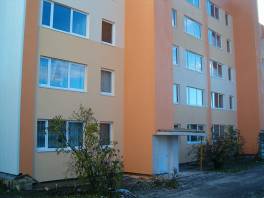 During and after insulation of the building – Lielcieceres str. 34, Broceni 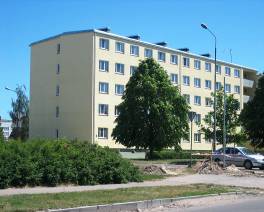 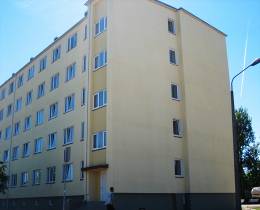 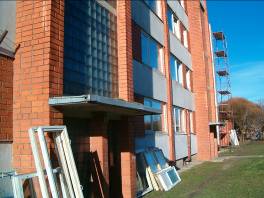 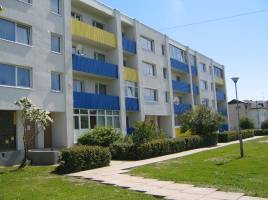 During and after insulation of the building – Tirgus str. 3, Salacgriva

The project in brief

Within the framework of the German-Latvian environmental protection pilot project "Energy-related modernization of residential buildings" seven residential buildings with a total of 463 flats were modernized with regard to energy efficiency from 2004 to 2005 in Latvia. A total of about 1.6 million euro were invested, which means an average investment of approximately 3.500 euro per flat. During the first heating period following the modernisation savings of approximately 40 percent were recorded in carbon dioxide emissions, heat consumption and heating costs. The Federal Ministry for the Environmet, Nature Conservation and Nucler Safety (BMU) supported the project with interest subsidies and non-reimbursable subsidies for construction costs totaling approximately 580 000 eur. The BNU commissioned the KfW banking group to make the reduced- interest loan available via the Mortgage Bank of Latvia (LHZB). The offer of support for the energy-related modernisation of residential buildings met with great interest from Latvian flat owners, administrators and municipalities. Despite the positive response to the technical and financial modernisation concept offered only one third of the funds were made use of due to the framework conditions in Latvia's housing sector. The modernisation concept included the mandatory implementation of a broad package of technical measures. The high savings in energy and costs for heating that were expected and the interest subsidies offered should convince flat owners to approve this package. An approval of 75 percent of the occupants was obligatory. For many of the modernisation projects this percentage was not reached. Legal and institutional structures of the housing administration contain essential obstacles to implementing the modernisation concept:

2.Legal ambiguities with regard to decision-making rules and obligations of flat owner associations, especially concerning areas of mutual ownership.

3.Difficulties in advising on and communicating the advantages of the support concept in order to obtain the necessary approval for taking up a loan to finance investments.

4.Occupants with a low income who are not able to bear the financial burden of taking up a loan.

5.Occupants who are not willing to bear the financial burden of the mandatory package of technical measures for the highest possible savings in energy.

6.Problems with taking up loans and securing them.

The modernisation of buildings successfully realised under the environmental protection pilot project confirm the approach of the concept and demonstrate its potential for practical application. In addition, the large number of project suggestions that could not be implemented also helped to highlight the weak points of the housing framework conditions in Latvia. The approach chosen and the obstacles encountered enable recommendations to be made on where framework conditions need to be further improved to get the modernisation of existing buildings underway on larger scale.

The huge backlog of maintenance work, the high energy consumption in times when energy prices increase drastically and the high emissions it entails, and not least the "climate" within the flats themselves are reasons to further intensify these efforts in the future.

1.Review and adaption of the legal framework conditions for the realization of energy-related modernisation of buildings by the Latvian legislative authorities, particularly with regard to flat owner obligations concerning mutual ownership and decision-making rules.

2.The Latvian parliament and government should supply the funds necessary to widely support the energy-related modernisation of buildings; especially for the financial support of flat owners with a low income.

3.Utilisation of funds from the European Regional Development Fund (ERDF) to co-finance national support for the energy-related modernisation of buildings.

4.Encouraging the flat owner's own initiatives for the energy-related modernisation of buildings in coordination with municipalities, occupants and their housing and municipal associations.

5.The institutional structures should be strengthened by adequate financial means, staff, technical equipment and adequate framework conditions for securing loans.

Ministries of the Environment opened up new paths

The environmental protection pilot project of the two environment minitries, which started in 2003, was intended to solve the financing problems by providing support to Latvian flat owner associations and housing administration associations. In cooperation with the KfW banking group (KfW), the German Environment Ministry (BMU) made loans at a reduced rate available by providing interest subsidies, The loans were utilised to carry out energy saving measures fir flats in residential buildings in Latvia, among them system-built buildings. The target group of this project were first and foremost Latvian flat owners who wanhted to do something about the state of their building of their own accord. The aim od the environmetal protection pilot project was to demonstrate the potential in the heating sector for saving energy and thus reducting CO2 emission for the purpose of climate protection. Furthermore, the project wanted to make a contribution towards improving the living conditions in Latvia. In addition to measures concerning the energy-related modernisation, measures to improve the living environment were supported as well. (4) (Bundesministerium fur Umwelt, Naturschmutz und Reaktorsicherheit (BMU): "Energy-related modernisation of residential buildings in Latvia", August 2010, 123p, - 117p.)

The reduction of necessary energy resources for heat generation, during 5 heating seasons, reached: