With over 37,000 Passive Houses in use worldwide (as of 2012), the Passive House Standard is rapidly spreading all over the world. As of today, Passive Houses have been built in nearly all European countries , the United States, Canada, and Japan – to mention but a few. And this number is on the rise! "The Passive House Standard is spreading rapidly around the world. The great potential of the energy concept is positively assessed, especially in areas where there is extensive experience in the building of passive houses. The concept of the passive house can be applied under different climate conditions and regional construction techniques" says Prof. Dr. Wolfgang Feist - founder of the Passivhaus Institut in Germany .(1)


Most experience with Passive Houses is available from Central Europe. Can Passive Houses also be built in warmer climates, where hot and possibly humid conditions prevail in summer? A theoretical study dating from 2009 has considered this question in great detail for the warmer climates of south-west Europe. The major finding is that indeed buildings which can provide high thermal comfort in both winter and summer by solely heating, cooling and/or dehumidifying the supply air required for good indoor air quality can be realised here. Some key results from the study are given on this page. First, it is important to note that, like in central Europe, space heating is the dominant energy demand in most climates of the Mediterranean. On a European level, the annual energy demand for residential space cooling is still relatively small, but major problems are expected due to the strongly growing market for air conditioning devices. High peak loads, which are bound to occur simultaneously in all households of a larger region, tend to cause blackouts already today. Therefore, addressing both heating and cooling demands is essential. (2) 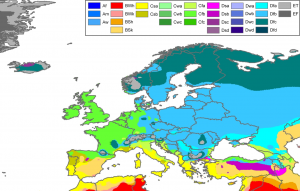 The climate of Europe is of a temperate, continental nature, with a maritime climate prevailing on the western coasts and a Mediterranean climate in the south. The climate is strongly conditioned by the Gulf Stream, which keeps mild air over the high latitude northwestern region over the winter months, especially in Ireland, the UK and coastal Norway. Whilst Western Europe has an oceanic climate, Eastern Europe has a drier, continental climate. Parts of the Central European plains have a hybrid oceanic/continental climate. Four seasons occur in Eastern Europe, while southern Europe experiences distinct wet season and dry seasons, with prevailing hot and dry conditions during the summer months. (3)

Draft of a Passivhaus in Granada (ES)