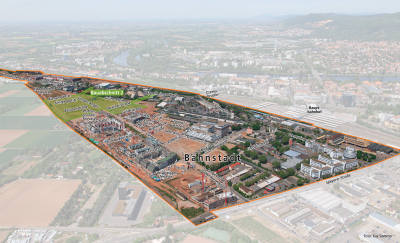 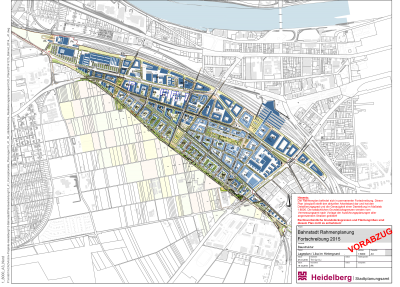 The urban district Bahnstadt in Heidelberg is a conversion of former railway premises into one of the largest Passive Houses estate in Europe which is supplied with renewable energy. The aim is to achieve a zero-emission housing estate.

The new urban district covers an area of 116ha is targeted to provide accommodation for about 12000 occupants and 7000 workplaces built according to the Passive House Standard (offices and university-related services such as laboratories, retail (food and non-food), restaurants, hotels and cafés). This district is supplied by a biomass cogeneration plant (woodchips). The official opening took place on 16, April 2014.

The innovation is the Zero-emission standard (or CO2 neutral) for this large-scal urban district development for commercial and residential use built to the Passive House standard. The PH standard must be verified by the PHPP (Passive House Planning Package). Building approval will not be given without the PHPP.

Prior to this, a free consultation relating to energy-efficiency will be elucidated. The energy-efficiency concept also includes the topic of "electricity saving", which also constitutes a part of the consultation. Information are made publicly available by means of the internet website of bahnstadt Heidelberg.

The PHPP as a requirement for energetic design and quality control, airtightness concept and concepts for prevention of thermal bridges. Documentation of flow rate adjustment ventilation systems and airtightness test are compulsory. PHPP must be accepted by the City and inspection of the building sites, e.g. thickness of insulation, examination of main components, final acceptance, testing of the building components and technical inspection

Traffic: Good local public transport connections including trams and buses, new cycle routes, separate network of cycle routes to the university, additional routes on bridges over the railway tracks. Useful space will be freed up by means of underground car parking under buildings.

Decreased land use: Less land will be used because this is converted land use, higher proportion of free land due to compact development

Soil management: Least possible soil will be moved away from the area, excavated earth will remain in the Bahnstadt area as far as possible.

Political decision-making of the Bahnstadt project

The political decision in favour of the Bahnstadt Project within the urban development context was made by the municipal council of the City of Heidelberg in Autumn 2007 (Appendix 2 of this material: 0393/2007/BV). See the link below regarding urban planning (Städtebauliche Rahmenplanung) “Bahnstadt 2007“, in which the various aspects of the Bahnstadt development are set out.)

In 2008 the municipal council of the City of Heidelberg added a binding commitment for the urban development concept for energy and heat supply (see link below) (Appendix I of this material: 0080/2008/BV), and an urban development contract was made with the EGH (Heidelberg Development Association) for creating the infrastructure and a requirement for investors to build Passive Houses on a large scale.

A recommendation was made to the public utilities company of the City of Heidelberg (public services), which led to voluntary adoption of the energy concept with reference to the district heat connection and biomass cogeneration plant within the context of business principles.

General information of the Bahnstadt

Energy-efficiency concept of the Bahnstadt

Quality assurance in the Bahnstadt

Electricity saving concepts of the Bahnstadt